We created the brand strategy, new slogan, and visual identity for the city of Trogir, a Dalmatian city whose historic core is protected by UNESCO. This is the most comprehensive rebranding of a city in Croatia. We worked on it for over a year. Trogir is a place that fascinated us with its beauty and depth of meaning.

Our mission was to put Trogir’s rich past and heritage in a contemporary context, while creating a compelling story that would attract tourists, enticing them to spend more and stay longer, but above all, our goal was to evoke the pride of the residents and bring life back to the old town throughout the year.

In an extensive survey, we analyzed numerous examples of successful European destinations such as Eindhoven, Glasgow and Leeuwarden, cities that after branding themselves, have achieved significant levels of tourism and economic growth. We conducted a survey of residents and tourists about their perception of Trogir, as well as a series of interviews with representatives of the City and the Tourist Board, along with numerous experts: employees of the Trogir City Museum, art historians, tourism professionals and craftsmen with a long tradition. We dove into the archives, researching expert literature on the historical, natural, geographical and cultural features of the city, in order to find unique elements about Trogir. 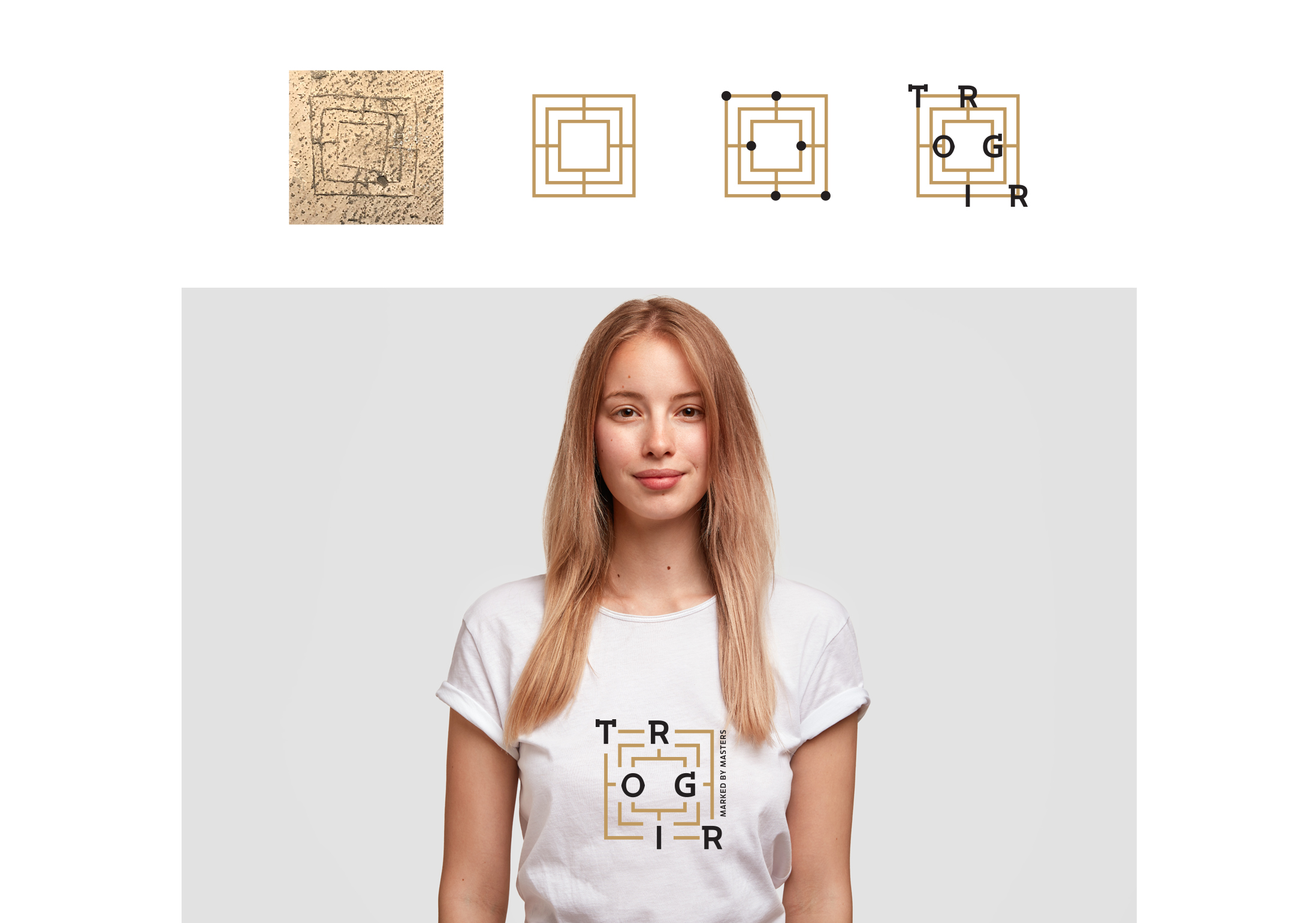 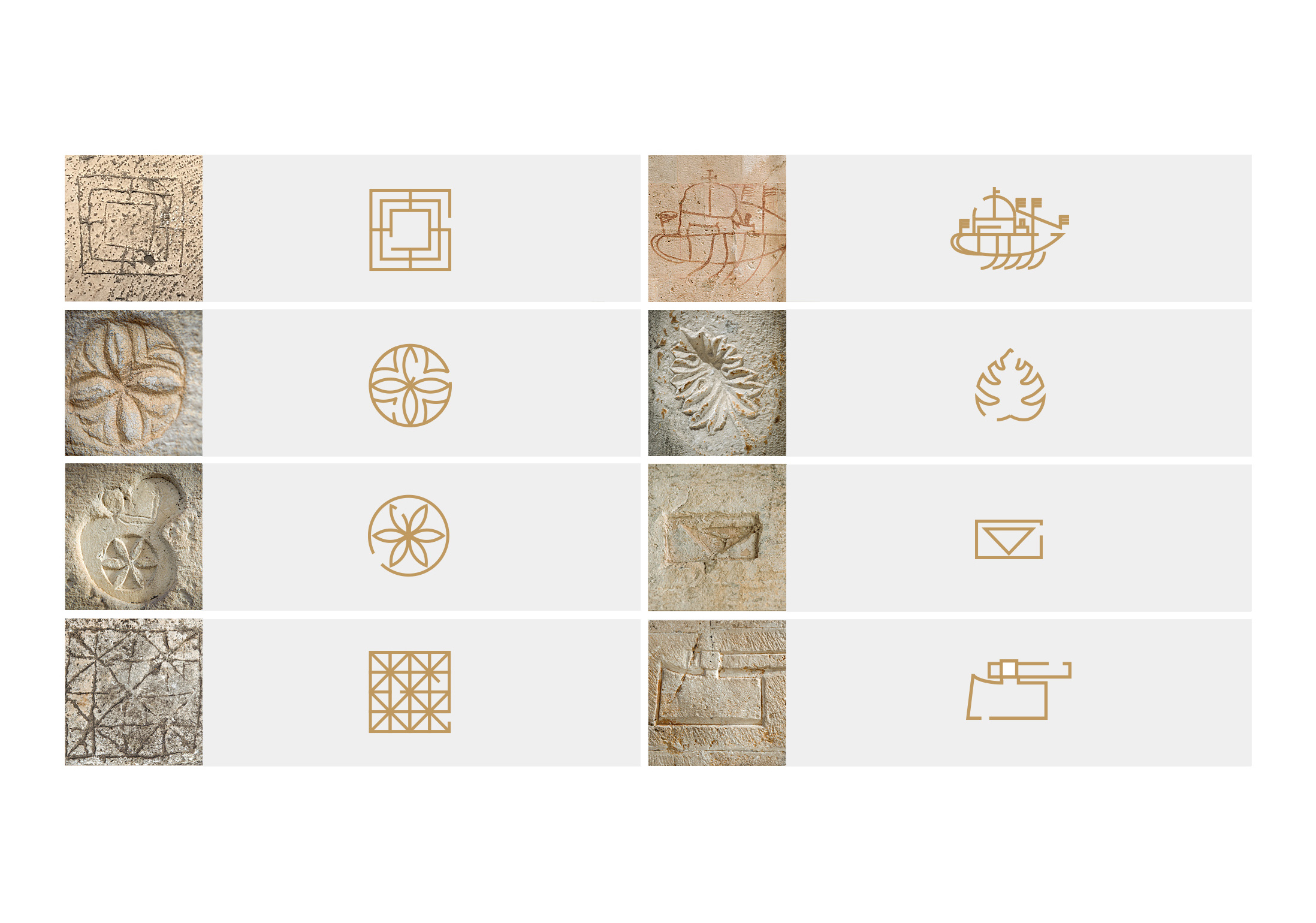 In the Middle Ages, world class craftsmen, such as Master Radovan, Nicolas of Florence, Muscardello, Andrea Alessi and Duknovic worked in Trogir, creating masterpieces, but also leaving smaller, detailed traces throughout the old town whether on the facade and the interior of the cathedral of St. Lawrence, or on the stone benches surrounding the church of St. John the Baptist.

The challenge was to unify Radovan’s gateway with the “medieval graffiti” and carvings such as merels, which we did by creating a story about discovering the traces left by masters in each and every corner of this city.

Trogir is the city with the most medieval marks in all of Europe – dashes, commas, hexagons, initials, merels game, and signatures testify to the daily life of these medieval master craftsmen, their prayers and vows or games that made their job even more fun. One of the first we discovered was a drawing of a boat on the facade of the cathedral. The drawing looks like contemporary graffiti or vandalism, but it is not. It is a covenantal prayer from an unknown 17th-century author.

Today, new generations of craftsmen are creating in Trogir – tradesmen, artists, people who earn a living from their skills and enrich this city with beauty and uniqueness. Today’s craftsmen – sculptors, jewelry makers, tanners and shoemakers, tailors, chefs, confectioners, winemakers, olive growers, painters, athletes, and art historians, all together prove that craftsmanship still thrives in Trogir.

Our story and the new slogan we created, “Marked by Masters,” testify to the city of masters.

“People have lived in Trogir for centuries. This town was first chosen by the Illyrians 3,600 years ago and life has remained unbroken here ever since; only the nations have changed. An unchanged and eternal belief remains that this place is the right place to live because it provides security, nourishes and enriches life.

Trogir is a city of masters, a city that draws us slowly, but convincingly, into the enchanted labyrinth of beauty, into the narrow stone streets, made of yellow smooth stone, like the warm colors of the afternoon sun.

This city of masters began Trogir’s master story with Radovan’s gateway, Duknovic, Muscardello, Nicolas of Florence and Alessi. These master craftsmen marked a turning point in the history of Trogir, placing it at the very top of the art world. The gothic style of Radovan’s gateway speaks to the humanistic truth of redemption, and that good and love always outweigh evil.

The signs or marks left by the masters will never be forgotten. They bear witness to the fact that these people not only created the erected buildings, but that they also enjoyed life, as evidenced by the various games carved around the Church of St. John the Baptist and the entrance to the cathedral.

The city of masters fills us with good feelings, reflected not only at the artistic level, but also in gastronomy, design, and enriching events. It also offers wonderful experiences for the palate, such as Trogir’s signature almond-filled cookies, rafioli. Due to its appearance, Trogir has been inspiring its citizens for centuries, so true masters of clothing and jewelry design continue to call Trogir home.

Trogir is engraved in memory, just as a memory is engraved on a building, on a wall, on a bench once made by the city’s master craftsmen. All the events located both in the heart of Trogir and on its neighboring islands have a way of sticking in your memory.

If we follow the footsteps of the masters closely, we will soon realize one truth – that with their skill, these craftsmen were inspired to create new skills. Perhaps that is why, after visiting Trogir, we realize that we too can create something that we thought was impossible before.

The traces of the masters invite discovery, exploration, and arouse our curiosity, and with each discovery of a new trace, a sense of happiness and contentment is born. Through the footprints of the masters, we will discover a part of life, the struggle against oblivion, but also the seal of mastery that the masters left to signify their authorship over a particular building.” 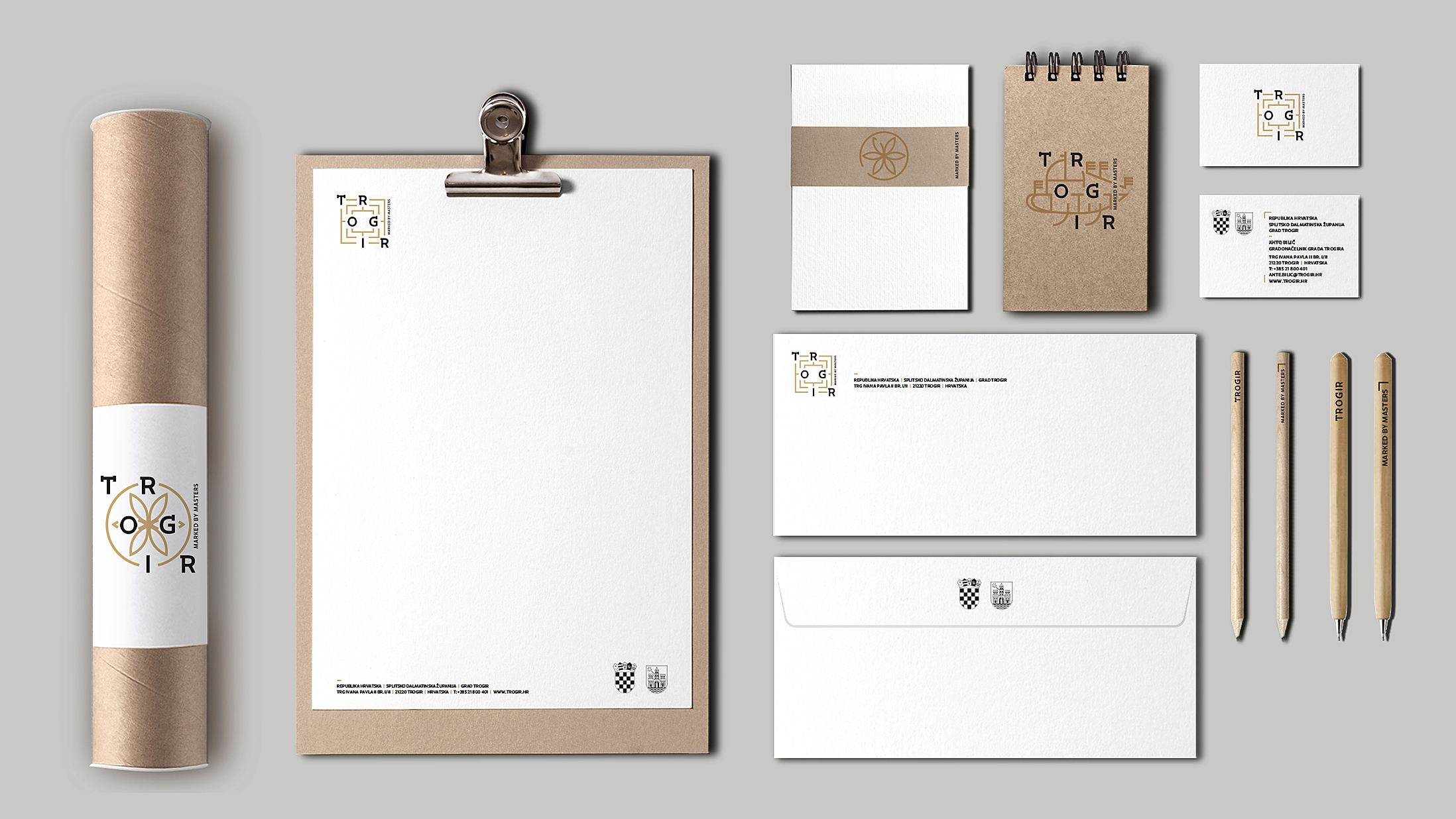 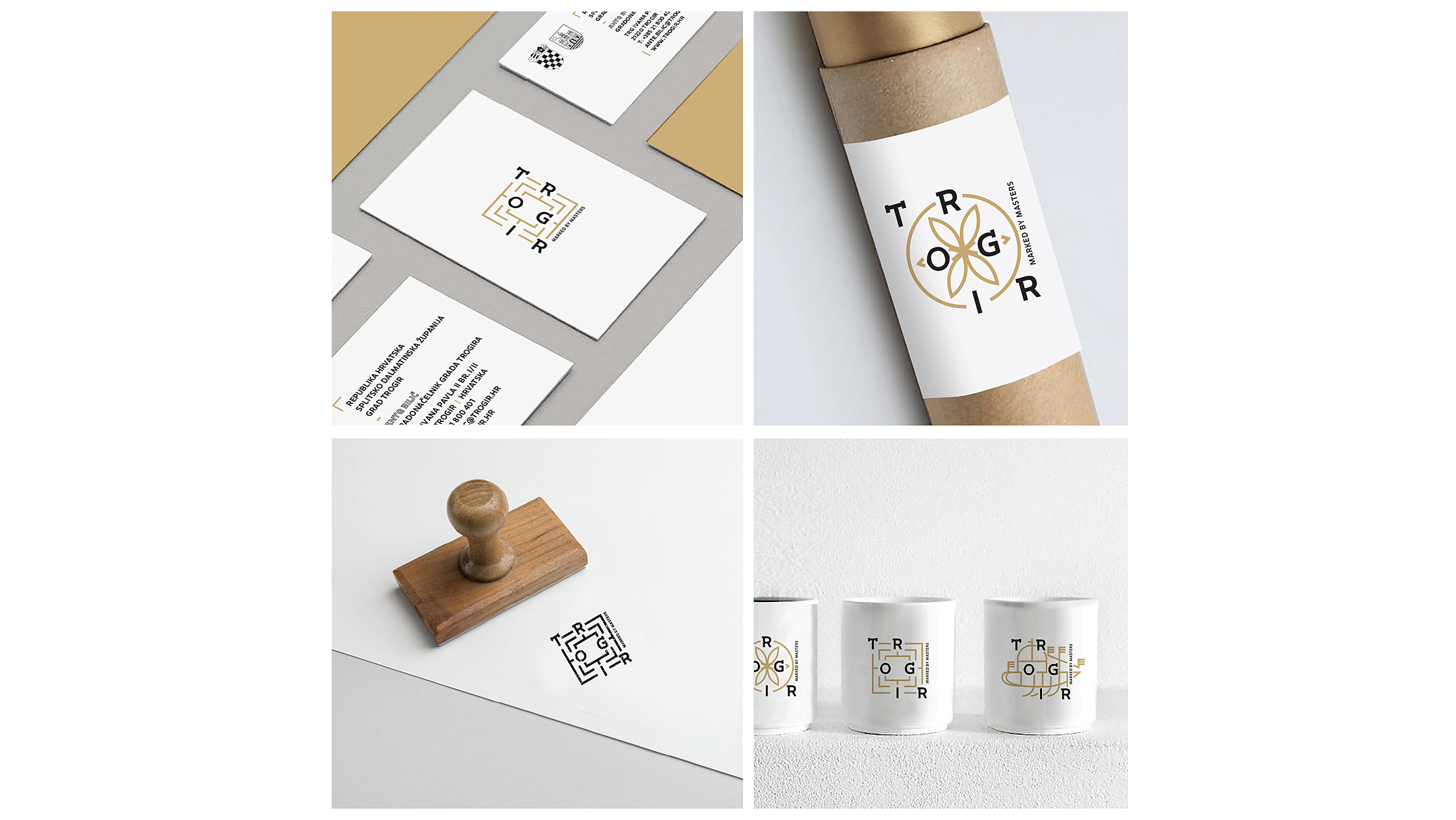 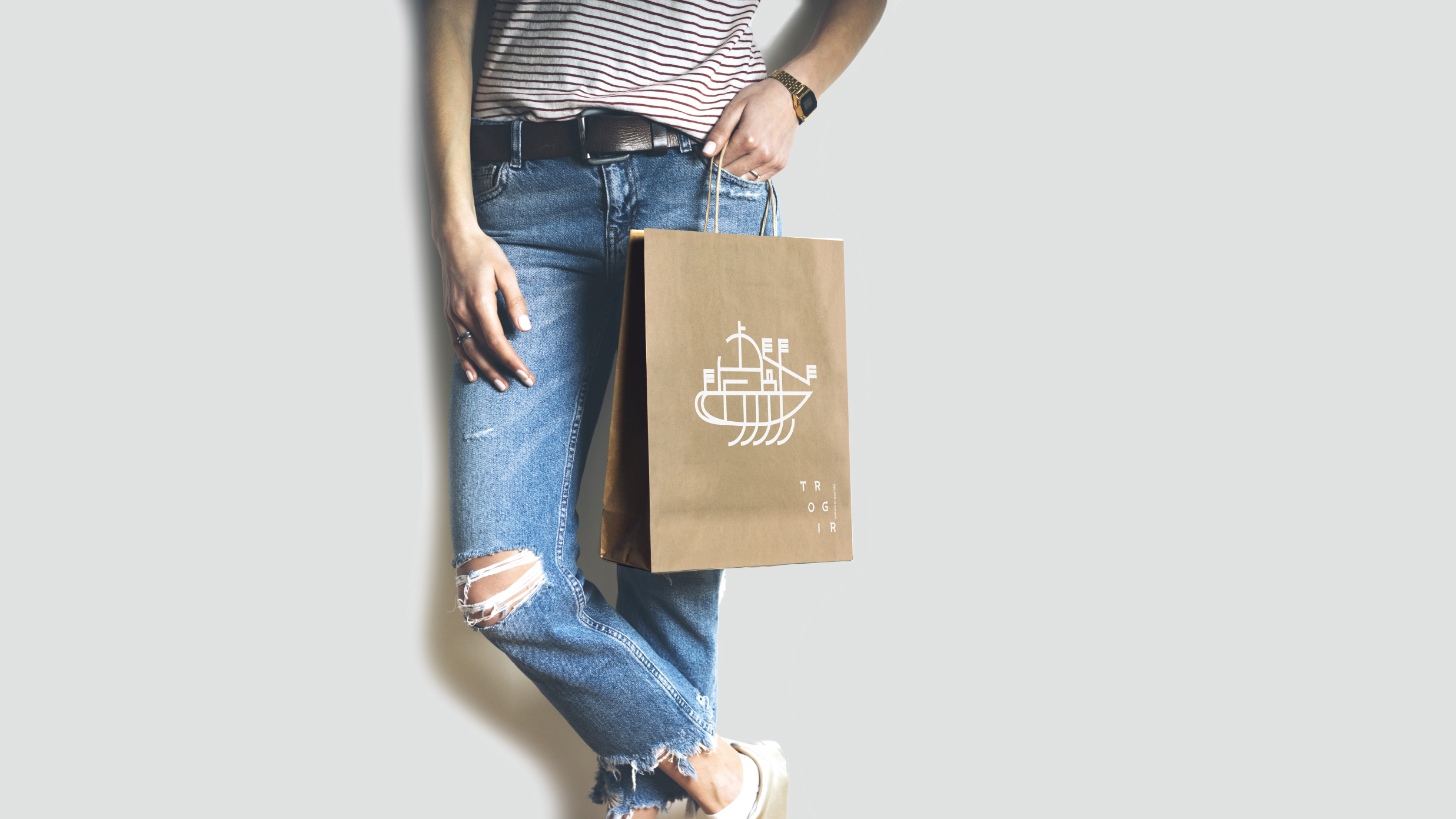 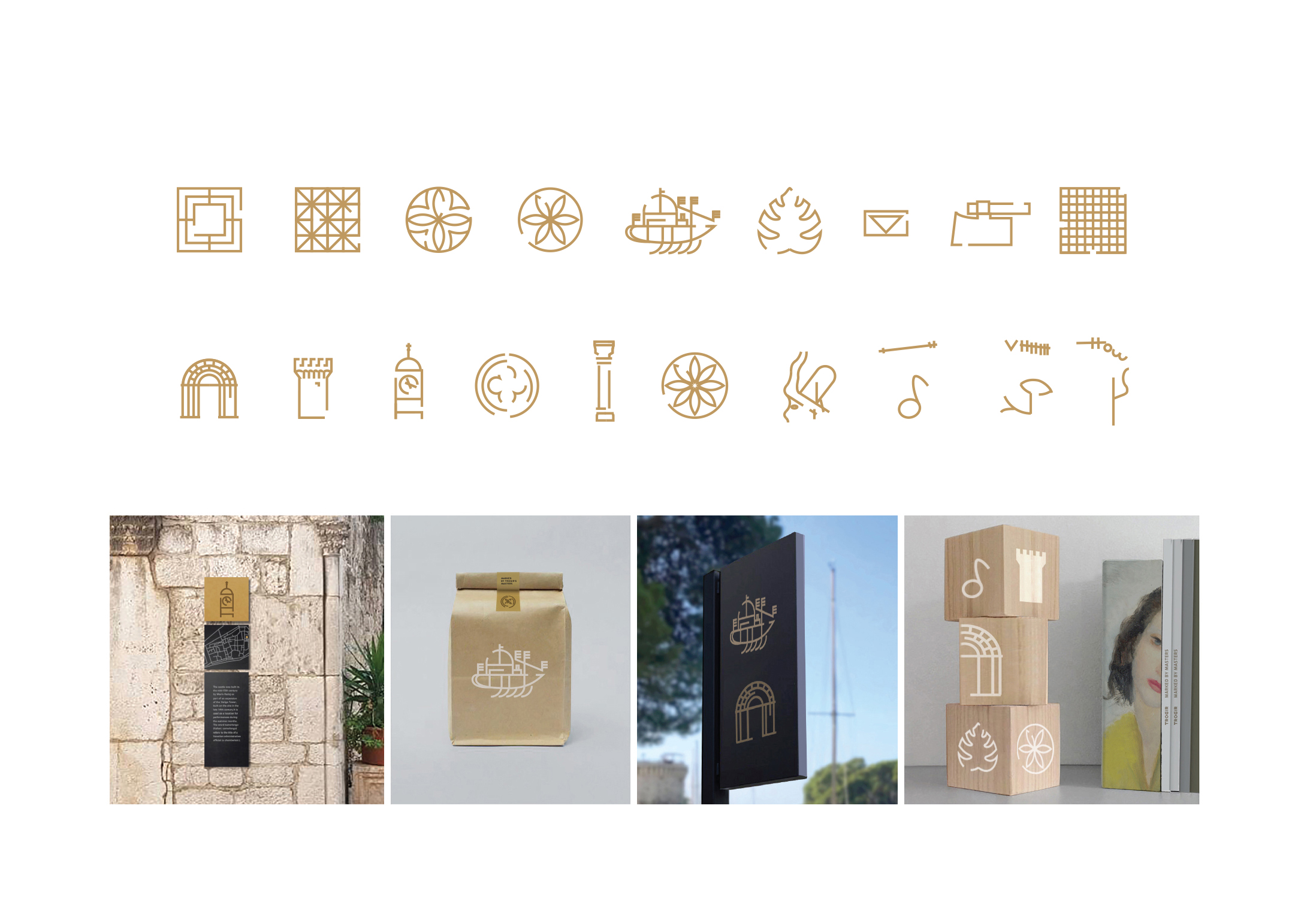 The new visual identity of the city of Trogir, created by Maja Bagic Baric, outlines the traces carved in stone and the city’s unique world class art. The logo depicts the merels game carved in stone, which is one of the common clues left by the masters on the Cathedral of St. Lawrence and the Church of St. John the Baptist. Maja Bagic Baric’s logo tells us about the simplicity and beauty of living in Trogir, and points out that along with magnificent buildings, the beauty of everyday life in the city is equally inspiring.

A pictogram system was developed, inspired by the urban and artistic heritage of Trogir, as well as outlining everyday life through the traces of the medieval masters who lived and worked here. Almost invisible at first glance, they are revealed only by careful search and discovery.

We found at the entrance of the cathedral an engraved signature of the medieval master named Muscardello, and this served as the basis for the development of Trogir’s typography. We asked Dr. Nikola Đurek to create the typography based on Muscardello’s signature. The new letter is of a contemporary character and takes the details of the inscription and letters which have been created during the medieval period that now serve as an upgrade of the letter. The writing family consists of three letter cuts, giving us a system that can produce different, visually interesting typographic images.

Trogir is engraved in the heart and the mind. It is impossible to forget, once we visit. Trogir is forever with us. 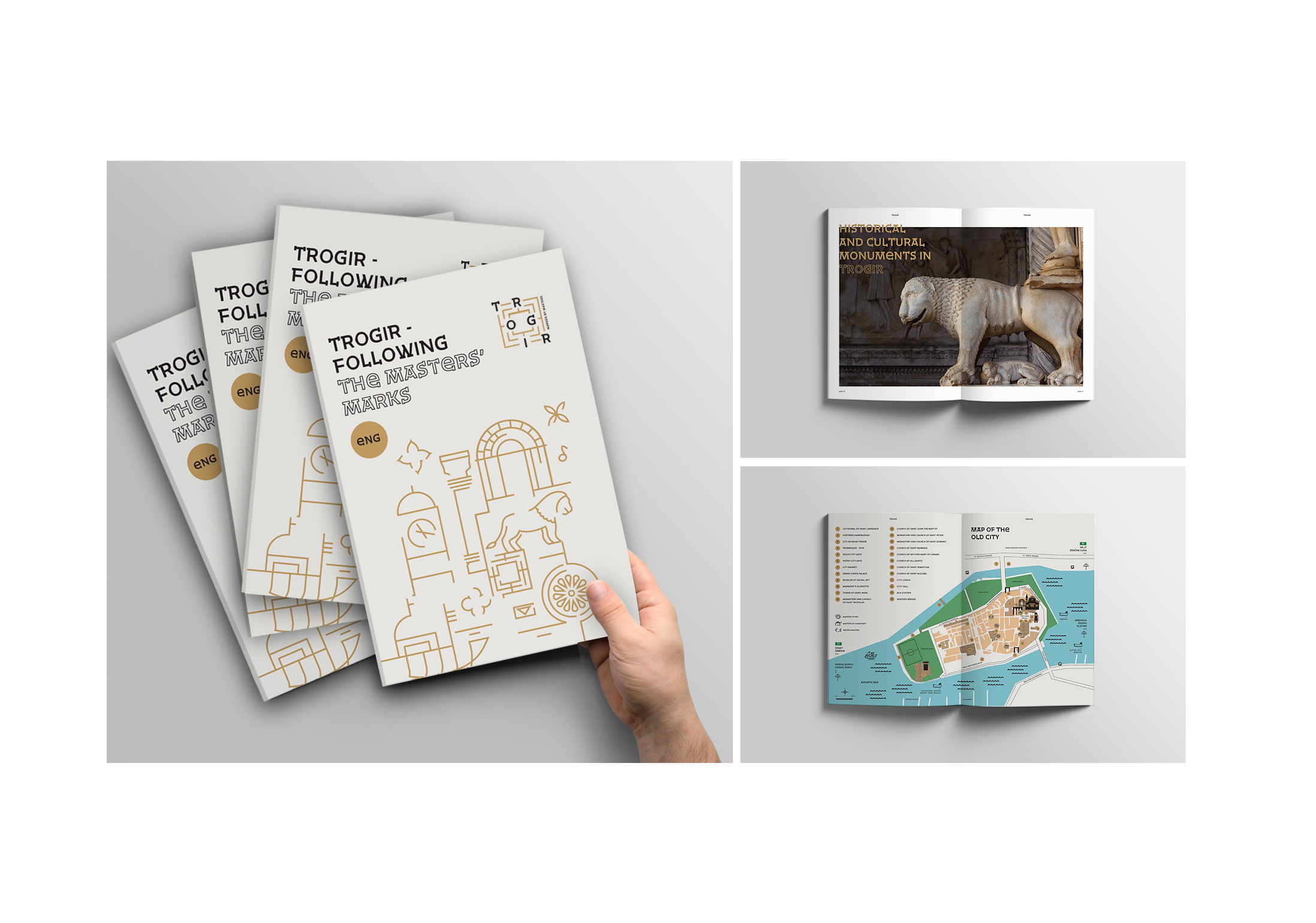 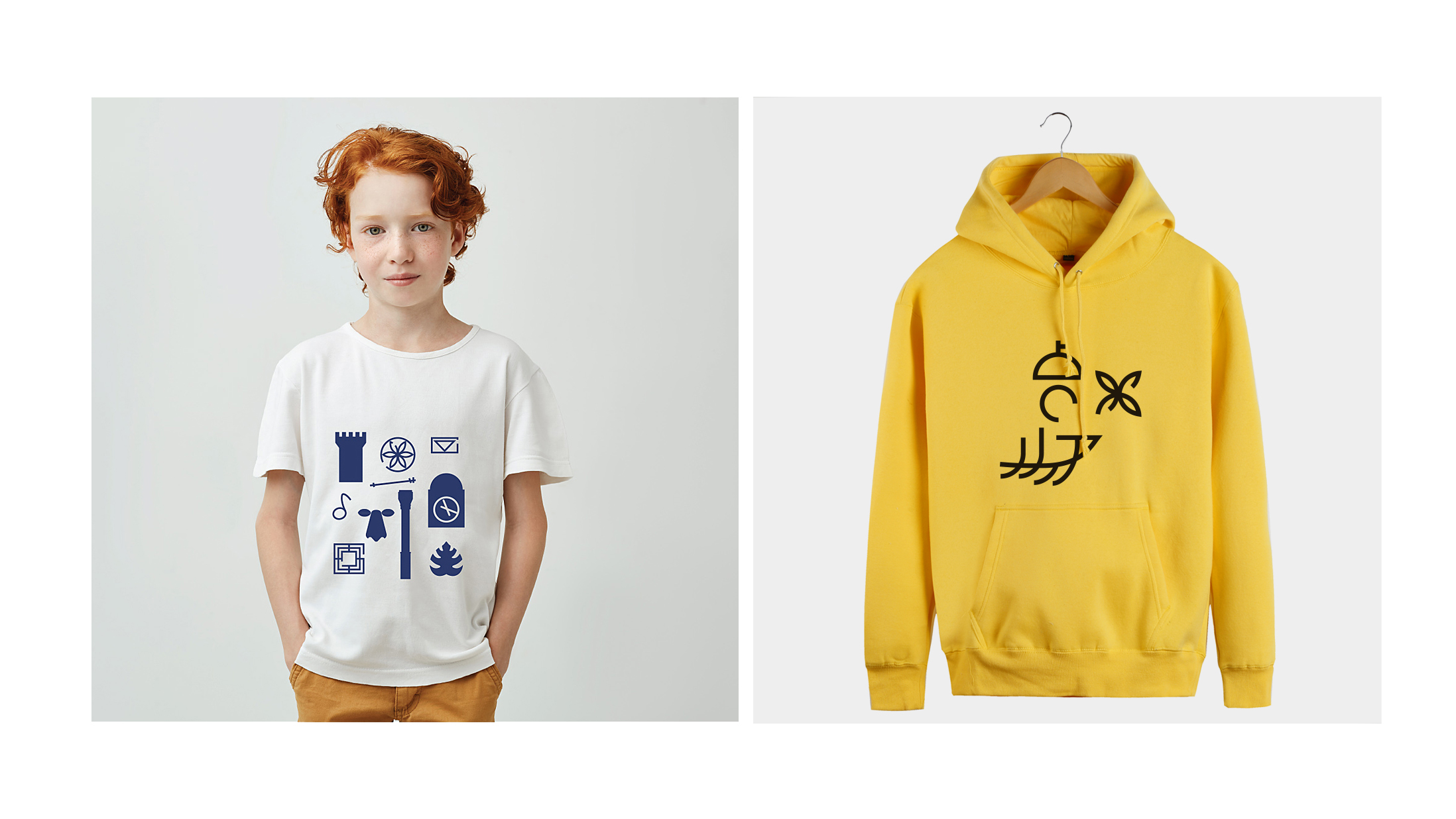 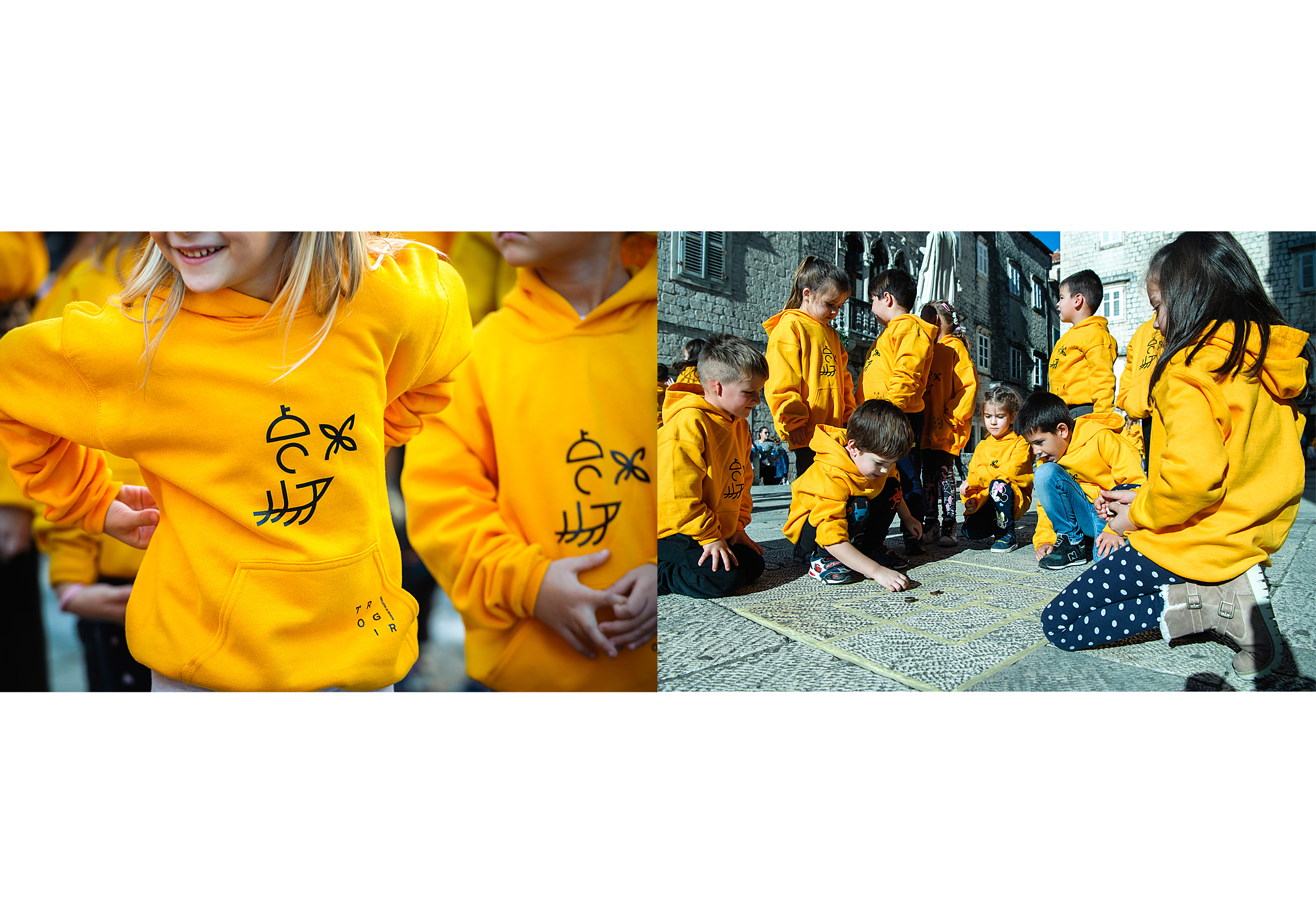 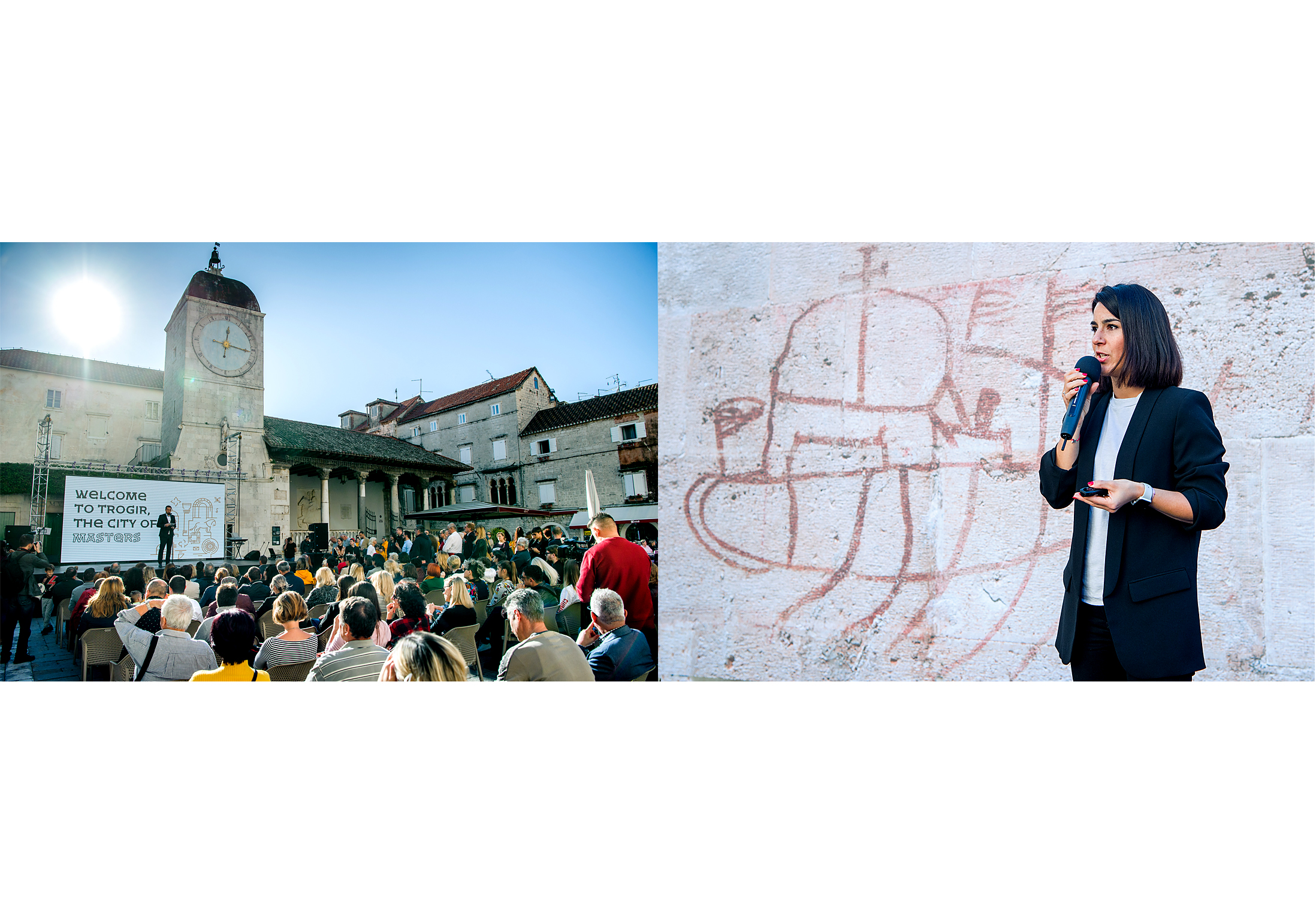 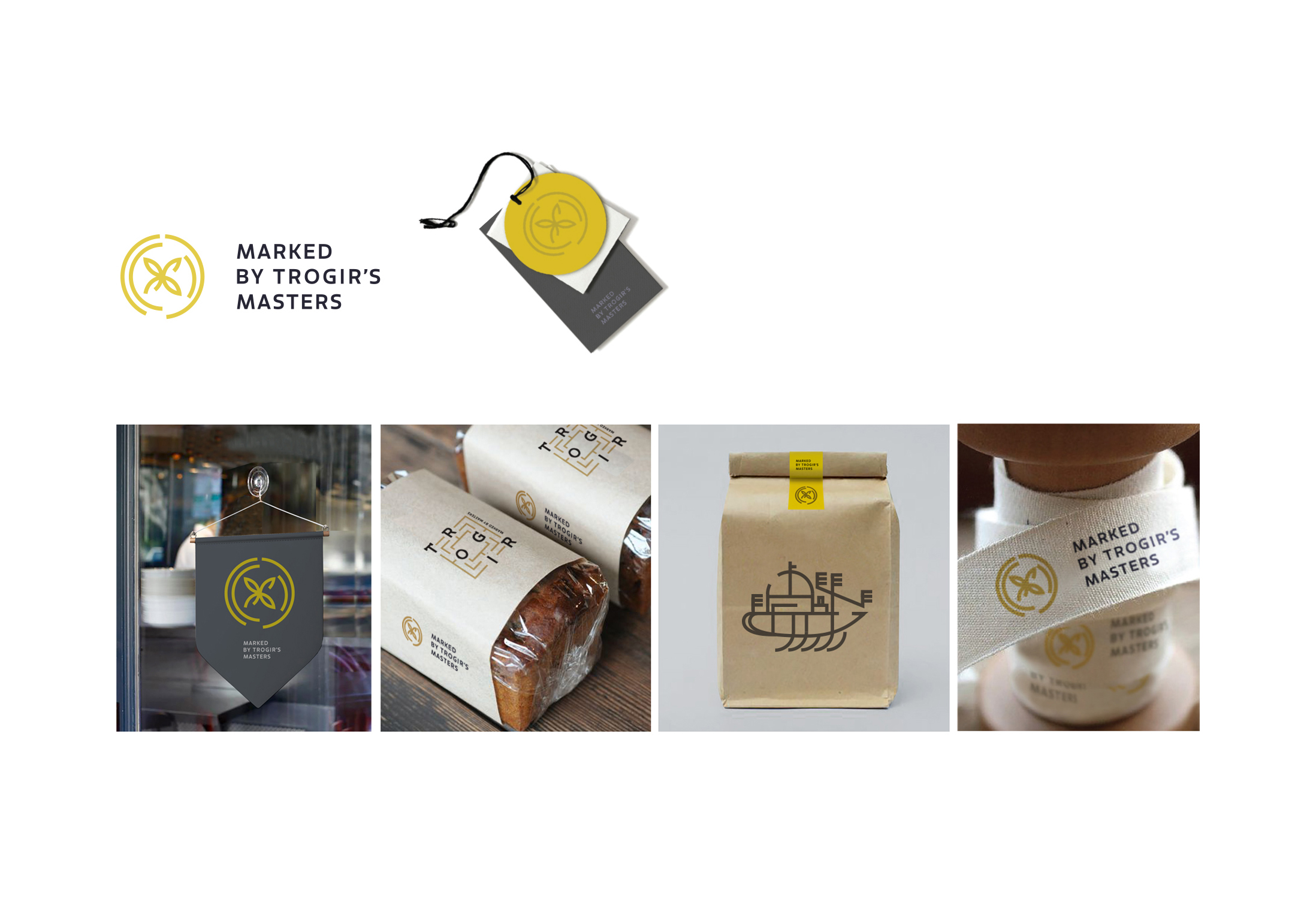